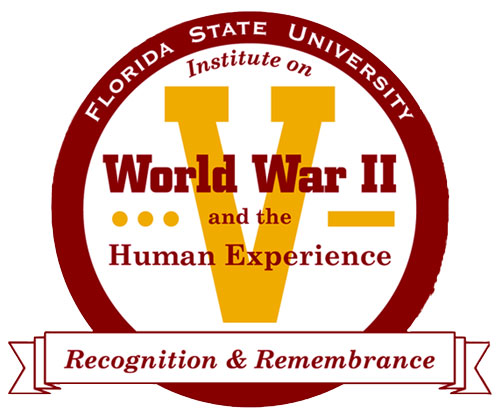 Institute on World War II and the Human Experience

The Institute on World War II and the Human Experience at Florida State University was founded in 1997 by Dr. William Oldson, in an effort to save priceless photographs that were destined for the trash. Paul Dougherty, a photographer with the 9th Air Force and 3rd Army, donated one of our first collections.  An even larger collection of documents and photographs soon followed from George R. Langford, who served with 20th Armored Division during General Patton's advance across France.  This collection also contains letters of his three other siblings, Daniel Langford, William Langford and Anniewell Langford who served in the military during the Second World War.

Today, the Institute on World War II has over 6,800 collections from individual donors providing invaluable primary resources for researchers.  These collections are from all over the United States as well as collections from other countries such as Austria, England, Germany, and the Netherlands.  These collections include materials from all branches of the American Armed Forces, women’s reserves, the Red Cross, USO, the Merchant Marines, and home front defense workers and volunteers.  Many of our finding aids  are located on the library archives' database. Contact Mike Kasper, our archivist, if you are unable to find something on a particular subject.

The Institute on World War II hosts lecture programs, exhibits and conferences for the Florida State University and Tallahassee community.  Our lecture program has brought leading scholars to campus bi-annually since 2012 with people like Conrad Crane, Sheldon Garon, John Kinder, Barak Kushner, Judy Litoff and others.  We have also hosted three international academic conferences in Tallahassee, “Global History of Religion in the Second World War,”  “Comparative Home Fronts,’ and “Letters in Troubled Times: Evaluating Epistolary Sources.”  Another initiative has been through multiple exhibits since 2013. Our more recent exhibits include “Artistic Expression through Conflict 1939-1945” at Holocaust memorial Resource and Education of Center Florida at Maitland, Florida (2019) which used our extensive collections of paintings, photographs and documents. The “Love, Dolly: Letters Home in World War II” (2019) at Chipola College, Marianna, Florida that highlight our letters and documents from six different collections.  To see our upcoming events, please visit our web site.

The Contemporary History Institute enjoys an international reputation for excellence. For the past three decades it has hosted scholars, speakers and students from around the globe. Through graduate training, research scholarship, and an active series of sponsored events, Ohio University's Contemporary History Institute provides historically grounded analysis of contemporary world affairs at both the national and international levels.

The Contemporary History Institute (CHI) performs a unique function in American higher education today: it analyzes the contemporary period in world affairs — the period from World War II to the present — from an interdisciplinary historical perspective.

CHI works with Ohio University's History Department whose faculty enjoy a reputation for excellence in the field of contemporary history and post-World War II studies. In the past two decades, these scholars have published more than two dozen books dealing with various aspects of the Cold War and post-Cold War periods as well as several major works on World War II and its origins. The depth of knowledge and historical perspective that these scholars offer CHI enables the Institute to bring interpretive clarity to the turbulent complexity of contemporary world affairs.

But the Contemporary History Institute also is fundamentally interdisciplinary in nature. It draws on faculty from the departments of Political Science and Economics and the E.W. Scripps School of Journalism who lend their distinct disciplinary and methodological perspectives to the enterprise. The synergy of interdisciplinary insights that results provides a powerful analytical foundation for understanding the recent past and the issues confronting us today.

The Intrepid Sea, Air & Space Museum is a premier cultural and educational institution located in the heart of New York City, the Intrepid Museum features the legendary aircraft carrier Intrepid, the space shuttle Enterprise, the world’s fastest jets and a guided missile submarine, and welcomes over one million visitors per year. The Museum provides STEAM-based education to more than 30,000 New York City students annually, as well as professional development for teachers, online distance learning, and accessible and inclusive programs and resources for veterans and visitors of all ages and abilities.  Through exhibitions, events and programs offered year-round, visitors are taken on an interactive journey through history to learn about American innovation and bravery.

Fordham University Press, established in 1907, the seventh oldest university press in the country and the nation’s oldest Catholic university press, is the not-for-profit publishing arm of Fordham University. The Press currently publishes seventy books annually, primarily in the humanities and social sciences, has an outstanding reputation for producing award-winning studies in the fields of anthropology, American studies, classics, communications, cultural studies, gender studies, history, literary studies, philosophy, political theory, race and ethnicity, religion, sociology, theology, and urban studies with a particular emphasis on creatively interdisciplinary work. Each year it publishes two books of poetry through the Poets Out Loud prize. Fordham University Press also has a long history of publishing books focusing on the New York region and in 2010 established the Empire State Editions imprint to better brand and market these popular regional books.

Stars and Stripes provides independent news and information to the U.S. military community, including active duty servicemembers, DoD civilians, veterans, contractors, and their families. Unique among Department of Defense authorized news outlets, Stars and Stripes is governed by the principles of the First Amendment.

Stars and Stripes has published a newspaper continuously since World War II. Our unique military coverage first became available online in 1999. Today, Stars and Stripes operates as a multimedia news organization. We publish the Stars and Stripes print newspaper edition Monday through Thursday, a special Weekend Edition on Friday for Europe and the Pacific, and a separate Mideast edition Friday through Sunday. In addition, we publish several weekly and monthly publications and numerous special supplements. On any given day, readers and visitors number about 1.0 million.

Stars and Stripes maintains news bureaus around the world including Europe, Pacific, and the Middle East to provide first-hand reporting on events. In addition to news and sports, Stars and Stripes news products contain all the elements of an American "news organization."

The newspapers are provided at no charge to servicemembers serving in harm’s way. In Europe and the Pacific, the newspaper is sold on base in coin boxes and at military exchanges. Home delivery to subscribers is available in Belgium, Germany, Italy, Japan, and South Korea. Stars and Stripes also produces a weekly U.S. edition distributed to more than 30 locations inside the continental United States.

Other publications include special supplements focused on topics of interest to the military community such as education, transition, and retirement planning. In Europe and the Pacific, Stars and Stripes produces a variety of products (print and digital) to help readers explore and enjoy their local communities by providing guides on culture, travel and other leisure activities.